How to Make Oi Kimchi

Making this dish is basically making a paste and chopping up your cucumber.

Take your cucumbers out of the bag and wash them well. You will need about 6 cucumbers for this recipe – about one pound. Take your cucumbers and chop off the ends and discard. Chop the rest of the cucumber into dimes about a quarter of an inch thick and add the chopped cucumber to a bowl.

Add the sliced cucumbers to a large bowl and start making your chile paste for the kimchi.

Add in the gochugaru, fish sauce, sugar, vinegar, minced ginger and minced garlic. Mix well and make sure all of the cucumber is coated.

Once all the ingredients have been mixed together, the kimchi can be eaten right away, but it is better after it has been sitting in the fridge for a couple hours.

Korean cucumber kimchi can be stored in an airtight container for up to 2 weeks.

Gochugaru is a staple spice in Korean cooking. It consists of dried chile peppers that have been dehydrated, deseeded and then ground. Traditionally, these peppers are sun-dried, however machine-dried peppers have become more a more widely available and less expensive option.

The spice level of gochugaru is about the same of that of a jalapeño, or even cayenne pepper – not too spicy but spicy enough to give a touch of heat to whatever it is you’re cooking.

When shopping for Gochugaru, you will have a choice between coarse and finely ground gochugaru.

Generally, the fine gochugaru is used to make gochujang, a spicy fermented chile paste. While the coarse gochugaru is the chile topping that goes on almost everything else in Korean cooking.

What to Serve with Kimchi

Kimchi is traditionally served as a condiment with Korean meals. I often eat this cucumber kimchi with a variety of different dishes. 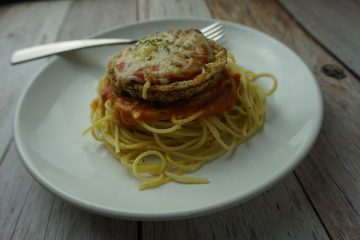