This Keto pie crust is one that can be rolled out or simply pressed into a pie dish. After tasting the dough for the crust, my first thought was how I could turn this pie crust into cookies- yes it is that good!

Make this pie crust for classic pumpkin pie or turning it into cookies is a simple task. When I’m baking for my family members that are on the Keto diet, I like to make a double or triple batch of this dough so it will last me throughout the holiday season.

Making this low-carb (also known as Keto) pie crust is actually quite easy, you just need the right ingredients. If you don’t already have everything listed below in your pantry, you can easily find these ingredients at your local supermarket.

How to Make Keto Pie Crust

When making this Keto pie crust, you will want to first gather all of the necessary ingredients, most of which you probably already have stashed in your pantry. Mix together the dry ingredients: the almond flour, coconut flour, whey protein and salt. Whisk the dry ingredients together until well combined. In a separate bowl, combine the eggs and water and set aside.

Add the dry mixture and the egg mixture and add in the vanilla and melted butter. Mix until just combined. The dough should look like cookie dough.

Form into a ball and cover with plastic wrap. Let the dough rest in the fridge for at least one hour, but overnight is better so the butter has time to harden.

The dough can be made up to one week ahead of time and can be frozen for 4 months.

Rolling out the Dough

After mixing the dough, chill it in the fridge for at least one hour. This will solidify the butter and make it easier to work with once it comes out of the fridge.

The most difficult part of this pie crust – or any pie crust really – is rolling it out. You can avoid that all together by putting the crust in the center of the pan and pressing it into place. Just remember to butter the dish before adding the dough. Even though there is a lot of fat in the dough already, adding PAM or some other oil to the pan will make your pie come out much more smoothly. No one likes it when their pie is left sticking behind!

If you press it into the pie dish instead of rolling it out, you won’t get that beautiful result that you see in the windows of bakeries, but it will be just as delicious. Pressing it into the pan is much easier than rolling it out and much, much faster.

After the dough is in the pie pan, remember to prick the inside of the dough with a fork to prevent air bubbles from forming when the crust bakes. If this step is skipped, the crust will begin to bubble up and it may make it unusable. If you peak at the crust as it’s baking and see that you forgot to prick it with a fork, just prick it as it is baking to avoid the air bubbles.

You will want to bake the pie crust before you fill it with your pie filling. Set your oven to 350 F to preheat and then remove the dough from the fridge. You can either flour a large cutting board and roll out the dough or simply press it into a pie plate.

Bake the pie crust at 350 F for 10 minutes or until the edges begin to brown. If the edges begin to brown too much, cover them with foil and continue to bake the pie crust. It’s important to bake the crust before adding the pie filling. It might seem like an unnecessary step, but if the pie filling and pie crust are baked at the same time, the crust will not bake all the way through, trust me I’ve tried.

After it is baked, it is ready for you to fill with your pie filling!

My favorite way to use this pie crust is to fill it with a Keto pumpkin pie filling. It’s a great way to cut a few carbs during the Thanksgiving and Christmas holidays.

How many Carbs are in this Pie Crust?

When on the Keto diet, it’s of the upmost importance to count carbohydrates to stay in ketosis. This dough has approximately 6 net grams of carbs per serving and 1 gram of fiber per serving.

This pie crust can also be made into Keto cookies. If you make the dough into small, 1-inch cookies, then the cookies will be approx. 4 grams of carbs each with just less than 1 gram of fiber per serving.

Unsure what to make for the holiday season for the whole family? Take a look below for some ideas. 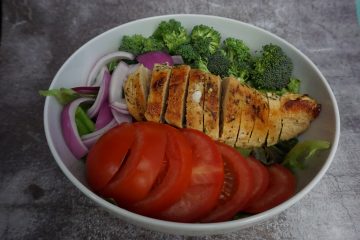