Everyone loves a piece of crispy bacon. Learning how to make it is a simple task when you have your oven at the ready. Add bacon as a garnish to a Bloody Mary or Twice-Baked Potatoes.

There are many methods when it comes to cooking crispy bacon. Learning how to make crispy bacon in the oven is one of the easiest and cleanest ways to cook bacon. It’s easy to clean since you can make your own grease trap with foil that you can just throw away. The bacon also won’t curl the way it would in the pan.

First, prepare a good setup for cooking your bacon.

Take a large baking sheet and cover it with foil. This will provide a grease trap and an easy way to dispose of the excess fat that will drain from the bacon.

Take a heat-proof cooling rack and place it in the lined baking sheet. Your uncooked bacon will be placed on the cooling rack.

Second, use a non-stick spray, such as PAM and generously spray the cooling rack before placing the bacon onto it. This will keep the bacon from sticking to the rack.

In this instance, I also trimmed off some of the excess bacon fat off the ends of the bacon to reduce some of the faty-ness of the bacon. This is an extra step that is not at all necessary, though!

Third, bake bacon in the oven at 350 degrees for between 12 to 15 minutes. Flip halfway through cooking so that it is cooked evenly.

Check the bacon after about ten minutes to check for done-ness. Cook to your desired done-ness.

Since you made it in the oven, it will not curl as it would have in a pan. Another benefit of cooking bacon in the oven is that it cooks more evenly. I tend to check it a bit less often in the oven and just pull it after the timer goes off.

Other than the obvious bacon and eggs, what else is there to serve bacon with? I tend to serve it as a garnish or as a topping. Try it with:

Have you tried this method of cooking bacon in the oven? How did it turn out? Tell me in the comments below. 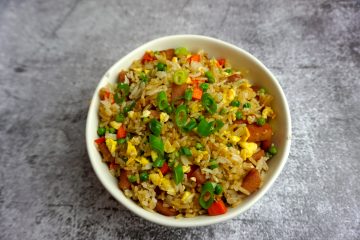