This cornbread sausage stuffing recipe is made with sweet cornbread, savory sausage and fresh herbs. This stuffing is synonymous with Thanksgiving and turkey. This is a southern favorite that uses cornbread as a staple ingredient mixed with sausage and sage.

Stuffing tends to be a deeply personal Thanksgiving dish. Some families have stuffing recipes that have been passed down through generations, while others can’t wait to dig into the Stove Top boxed stuffing. No matter which holiday meal you sit down to, every gathering has a specific stuffing served.

What’s the Difference between Stuffing and Dressing?

Once and for all, what’s the difference between stuffing and dressing? Stuffing is prepared and then cooked and stuffed inside a cavity, such as poultry, like a turkey or chicken. Dressing is cooked and served on the side

So this recipe should technically be called Cornbread Sausage Dressing, but I’m so used to calling it stuffing that it’s become a habit. When I hear the word “dressing”, I think of something like a Caesar salad dressing.

Also, this sausage stuffing has a lot of meat in it. If you are serving a meatless crowd, feel free to skip the extra protein. Or you can replace the sausage with something else. If you are serving this at the Thanksgiving or Christmas table, you can find a way to use part of the main dish that is being served. For example, take some of the giblets from the Turkey and fry those up instead of the sausage.

For this recipe, I added a lot of fresh herbs. If fresh herbs are not readily available, or you would prefer to use some of those dried spices you’ve been meaning to use, go right ahead! 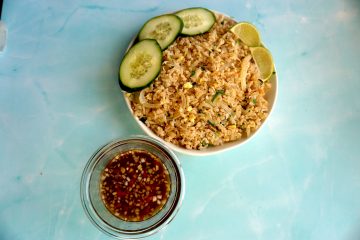